It’s 50 years since a certain Mrs Johnson, resident of Harper Valley, USA, marched into her daughter’s school and disrupted a meeting of the Parent Teacher Association. In 1968, singer Jeannie C Riley took Tom T Hall’s song Harper Valley PTA to the top of the charts, and plunged us into a world made familiar by books, films and songs.

The song immediately creates the atmosphere of a close-knit community in a picket-fence town, with a church or two, a minister, a doctor, a diner, a bar, a milk bar, a high school, right and wrong sides of the tracks, and a cast of people, saints and sinners with quirks and oddities. 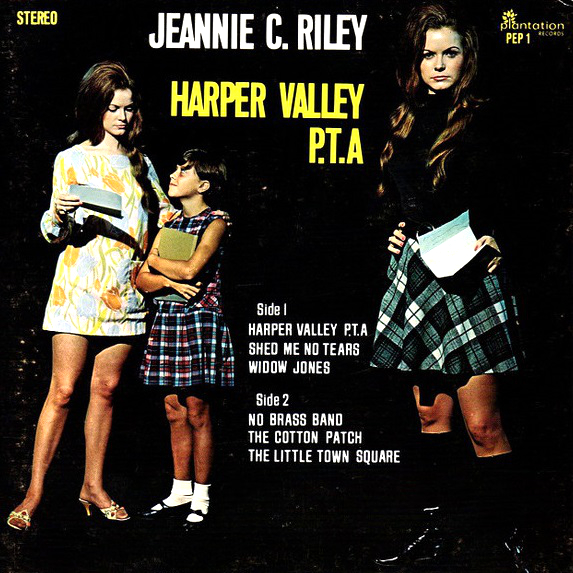 Harper Valley PTA tells a dramatic story. It focuses on Mrs Johnson, a widow bringing up her teenage daughter by herself. She has quite a social life, it seems. She goes out on dates and dresses a little sassy. Well, good for her. But some people in town have their eye on her, namely the worthies who constitute the junior high school’s PTA. They decide that Mrs J is not a fit mother, and they feel it is their duty to write her a letter outlining her failings.

These failings are summed up in a line or two, based on gossip and tittle-tattle. She’s wearing her dresses ‘way too high’, and it’s reported that she’s been ‘drinkin’ and runnin’ round with men and going wild’.’ This is enough for them to tell Mrs Johnson they ‘don’t believe you oughta be a bringin’ up your little girl this way’.

Having written the letter, they give it to her daughter to take home. Now considering that the mission of the PTA is to take an active role in supporting children and promoting family and community engagement, you might query every part of this procedure. But Mrs Johnson is right ahead of you.

She puts on her mini-skirt, and, I like to imagine, a pair of cowboy boots, which would give a more satisfying, powerful clunk than the high heels which may have formed part of her wardrobe. She marches right into the meeting room and claims the right to address the PTA. Then she calls them out, one by one, exposing their own behaviour.

Who do we meet? For a start, there’s Bobby Taylor and his missus. He’s out of town a lot. Seven times, he’s asked Mrs Johnson for a date. In his absence, his wife drinks — or, as Mrs J neatly puts it, she ‘seems to use a lotta ice, whenever he’s away’. How about Mr Baker, whose secretary had to leave town suddenly? And there’s another widow, Jones by name, who leaves her window shades open, just enough. Shirley Thompson is sitting there in judgement, with a hint of gin on her breath. Mr Harper couldn’t make it. He stayed too long in Kelley’s Bar — again.

How dare they say that she is an unfit mother, Mrs Johnson declaims. The town is like a little Peyton Place, and they are a bunch of hypocrites. We know that all this happened, because her daughter, bursting with pride, tells us the story of the day her momma ‘socked it to the Harper Valley PTA’.

Mrs Johnson fights fire with fire. She asks how can she be accused of drinking too much and having sexual liaisons by people who are doing the very same things. There is no philosophical discussion about how a woman can be a good mother (whatever that means) and also go out with men and wear mini-skirts, and how many a bad mother (whatever that means) presents a socially acceptable facade.

This story isn’t about theories of child-raising and education. It doesn’t engage us in speculation about appropriate behaviour. It’s all about not letting people get away with hypocrisy. It’s an attack on the sanctimonious and the self-righteous. Amen to that.

But there is a sharpness and a tang to the song which makes its images linger, and elicits some fellow feeling for the cast of sorry characters who call down judgement on the town’s good-time gal. We see a number of brief vignettes, presented in a filmic or novelistic way, which hint at sadness, frustration, despair.

Bobby Taylor, unhappily married, compulsively cheats on his wife, using excuses to stay away from home. And she sits by herself, drinking into the early hours, wondering if there is anything going on between her husband and that woman who runs around town in her mini-skirts, who he clearly fancies. She wonders what he is doing and who he is with. She fears that someone is sharing his hotel room.

Why did Mr Baker’s secretary leave town? We imagine she has gone away to have her baby, the product of their illicit affair, maybe to a city like New York, where she can be anonymous, or perhaps to stay with a relative or friend. There’s a story here, one which tickles at our imagination.

We feel we know Kelley’s Bar, full of men who don’t want to go home, or have no home to go to. What is Mr Harper’s story, we wonder? How does he fit into the bar’s clientele? He misses the PTA meetings because he can’t drag himself away. What else is missing in his life? Perhaps he sometimes sees Shirley Thompson in the bar, she who likes a nip of gin. Maybe she needs a stiffener before attending those meetings.

Another Time, Another Place

Here’s something interesting about Mrs Jones the widow — Tom T Hall, the writer of Harper Valley PTA and other songs which stand proudly in the canon of story-telling country music, penned another one actually called Widow Jones (which was also recorded by Jeannie C Riley). The characters in the two songs might be one and the same. In Widow Jones, the eponymous persona makes a major contribution to the ‘education’ of the young boys in town. Is this what is glimpsed through the crack in the window blinds? Or maybe they are open as a signal...

The reference to Harper Valley being ‘a little Peyton Place’ also reverberates. Peyton Place was a sensational best-selling novel by Grace Metalious, published in 1956. It was turned into a popular TV series which ran from 1964 to 1969. However, although the song was written during the latter period, the vibe of Harper Valley PTA resonates strongly with the atmosphere and style of the novel (as well as echoing the vibe of the early Mad Men episodes).

Tom T Hall, who was dubbed The Storyteller, has said that the song is his novel and was inspired by his admiration for Sinclair Lewis, who won the Nobel Prize in Literature in 1930. Tom’s understated, pared-down treatment of the devastating effects of vicious gossip, the shredding of reputations and the sense of male power and hierarchy in small towns and elsewhere shows a novelist’s craft and sensibility.

The PTA might have considered that young Missy Johnson was not getting a good upbringing, but what an education she received that day. She learnt not to crumble under criticism, and that you can speak up and defend yourself when you are wrongly accused. She learnt that women are often subjected to double standards, but that they can challenge such judgements and attitudes.

She might also have become aware of the dangers of casting the first stone, and of the need for understanding and compassion when we consider other people’s behaviour and our own fallings from grace.

The tone of the narration of Stan Barstow’s A Kind of Loving draws you in straight away. The mixture of the historic present tense and vernacular expressions make the the story leap off the page.

How Picture Postcards Present a Snapshot in Time

Postcards give a snapshot of an era and a certain kind of character, not just in the images of seaside resorts and towns and villages, but also in the content and tone of the messages.

Hats Off to the Clive James and Pete Atkin Songbook

Songs About Real Places: Glen Campbell’s Town Trilogy — Galveston, Wichita Lineman and By The Time I Get To Phoenix